Basic training is a killer—in more ways than one 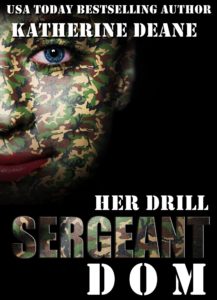 USA Today bestselling author Katherine Deane brings you a romantic suspense that will leave you gasping.

Twenty-four year old journalist Smyth McCullen is following the trail of a killer, right onto Fort Hancock Army training center. After two murders of young women just out of basic, both under the same drill sergeant, Smyth knows she must join the Army to unravel the truth.

Little does she know that Basic is dangerous in more ways than one. Protecting her battle buddy, working through sixteen hours of grueling training a day, and following a potential bad guy, is nothing compared to falling for a dominant, undercover drill sergeant.

Hunter Jones is undercover, looking into the potential murders under Drill Sergeant Cage’s direction. He’s been through many deployments, both public, and some not so public. He’s interrogated bad guys, fallen behind enemy lines, and is prepared in every way to act as a drill sergeant and save another potential victim. What he’s not prepared for is the sexy, young strawberry blonde who is definitely not eighteen.

As their attraction grows, they march one step closer to the end of the session, and imminent danger. Can Smyth find the killer in time? Can Hunter protect the next target, especially if it’s Smyth?

Her Drill Sergeant Dom is a fully written story with HEA and no cliffhangers.

“So my punishment is over?”

“Yes, it is. And you are forgiven. Did that kind of punishment work better than a spanking? Be honest.”

She wanted to grumble and lie and tell him no. But she chose to be frank, even if it did suck. “Yeah. It was horrible. I was embarrassed and angry and turned on with no relief in sight. And then you said all that stuff— it was all true—but it hurt to hear. I think your disappointment was the worst part of the punishment.”

“Thank you for your honesty. Now I know how to punish you in the future. And spankings are definitely on a different list.”

“But I’m still getting spanked today?” Her voice raised a few octaves with hopefulness.

“Hell yeah. I’m going to spank you so hard, you’ll feel it for the next week. And you’re going to love it.”

He sat down on the bed, and beckoned her toward him. “Over my lap, naughty little Private.”