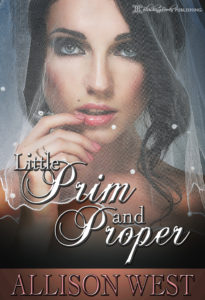 When Kathryn Arrington is kidnapped from the streets of Victorian England, and forcefully taken against her will, all she can do is go along with what is required of her at the Academy of Submission, until she can plan her escape.

Being dressed and treated as a little is tedious work.

When Mr. August Sanders visits the academy in search of a little bride, he sets his eyes on the alluring Miss Kathryn. Desiring her to be his little Kat, August declares he wishes to purchase her outright, for the intention of marriage. She hastily agrees so that she might leave with him. Perhaps she will find a better life away from the care of her strict nanny and the despicable Mr. Edwin.

What Kathryn hopes is a fresh start turns out to be a constant reminder of those she left behind at the academy. With the threat of harm to her family looming overhead, she must find it in herself to trust August.

The night air grew cool and Kathryn Arrington pulled her cloak tighter, cinching it together with her hands as she walked towards home. At twenty-three, her parents grew tired of her lack of prospects for marriage, insisting she take the hand of the next man who asked for her to marry him. Arrangements of marriage came and went, with her three younger sisters. They had found no trouble when it came to accepting a proposal and giving their dowry to a fine gentleman.

Kathryn, however, had been unable to sit still long enough to catch the eye of a prospective suitor. Against her parents’ wishes, she traveled the rails with a few pence she had secretly earned gambling. It was not the most respected way to earn a living and as for being a woman, she had never looked the part of a lady when she gambled, always wearing a top hat to hide her dark curls and the trousers of her father, albeit a bit baggy. No one seemed to pay her any attention. Her parents learned to just be grateful when she returned home at night and decided it best not to ask questions on where she had been. Perhaps it was due to the fact she found most men repulsive that they did not worry themselves too sick on her whereabouts. She had no reason to soil her name or reputation so kept the drinking to a minimum and her skirt down at all times. Besides, she had found no man worthy of her charm.

Tonight she did not dress in her father’s clothes; it would have been highly inappropriate. Instead, she dressed as a lady, with a dark blue gown to her toes that bustled out from her hips. The cloak she wore was as dark as the night sky, a rich blue that looked black under the moonlight. She had spent the afternoon riding the train, seeing all of London, exploring every crevice of the city.

Her family lived in Stanton, just outside of Oxford. The ride would be too long by carriage, and her parents’ coachman never would have escorted her on the trips she took without merit. Although her parents had given up on disciplining their daughter, it did not mean they condoned her behavior either. She had learned early on, at sixteen, that if she wanted to see the world, then she would have to figure her own way to do so.

Gas lamps shone under the moon and she walked with haste, picking up her feet in the brass heels to hurry and catch the train. She had not paid attention to the hour, which meant she had missed the second to last train back home. If Kathryn did not run, then she would find herself alone for the night, outside. It would not be a pleasant experience for anyone, let alone a young unwed woman. The few pence she had in her pocket would not suffice for a night’s sleep under a roof.

Kathryn loved London. The busy nature of the city, the constant rush of people as she found herself lonely back at home. Her parents had grown tired of her presence under their care. Her sisters had been married between the ages of sixteen and eighteen. She half-wondered what was wrong with her. Had it been her desire to explore and chase after whatever caught her eye? Surely a man would be pleased with such a captivating young woman.

In the distance she heard the whistle of the train. “Christ!” she cursed under her breath, picking up the hem of her skirt as she high-tailed it in a very unladylike manner towards the train station. The distance between her and the engine was too far apart and even as her legs burned and she gasped for breath, she found herself unable to reach the station before the train departed London.

Now what was she to do? She found a seat on the bench at the station, watching as the train disappeared and the tracks now lay empty. Morning would not come for several hours and sleeping outside seemed barbaric. Kathryn sat alone, in the darkened station before retreating back towards the city. Her day had been spent shopping at the market, imagining the fine luxuries wrapped around her body. She had tried on dresses and jewels that she knew were far outside of her budget. Her parents may have been well off, but it did not mean they fed her money on a whim.

Allison West has been inventing worlds and writing stories for years. Her favorite novels are those that leave a lasting impression, long after the final page is read. You can find more about Allison on Facebook, Twitter, and her blog “Spanking Author.” http://spankingauthor.com

SIGN UP for Blushing Book’s Newsletter for special sales, free books and the latest releases from your new favorite authors. Just copy and paste the following link into your web browser: http://goo.gl/sR1NKn