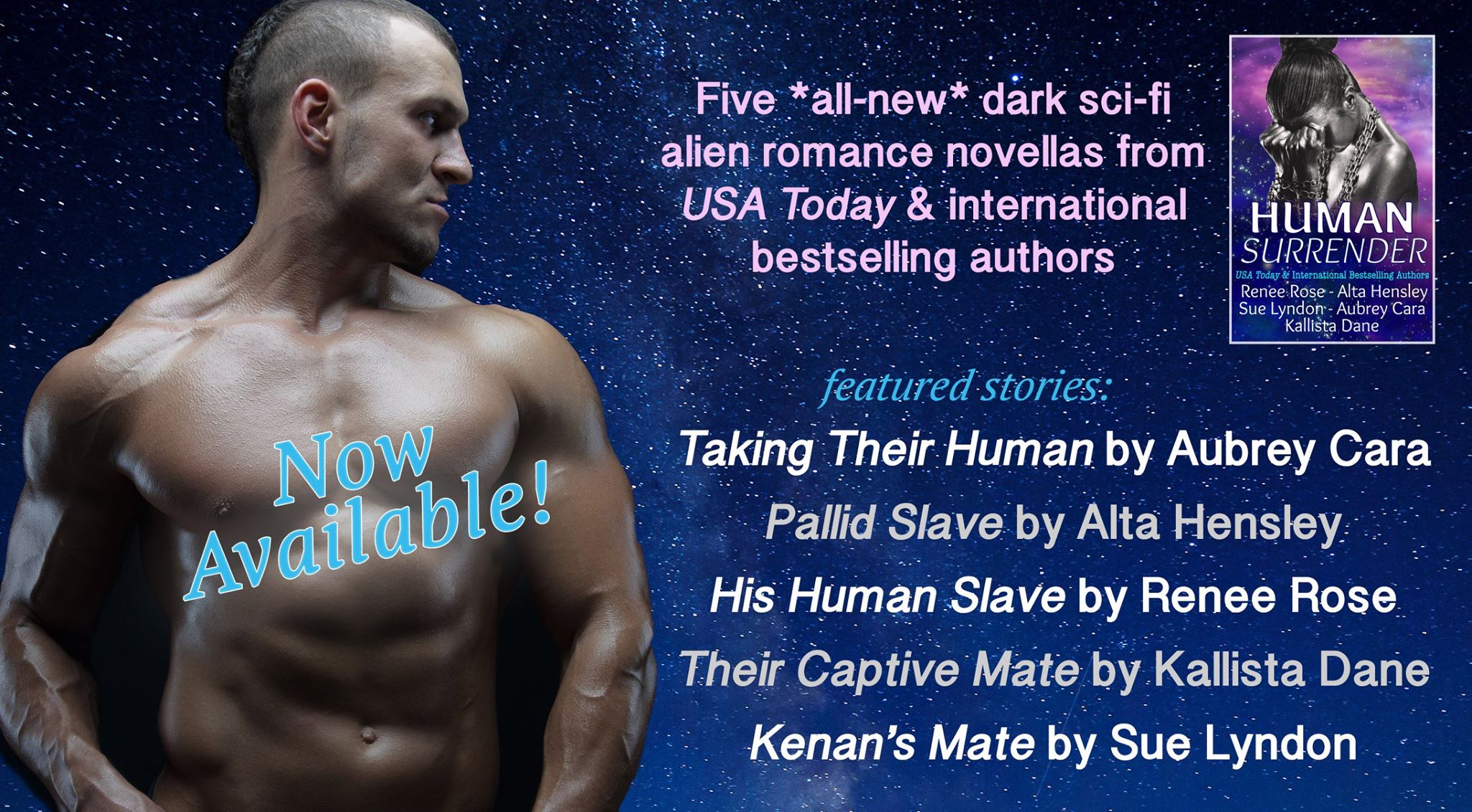 They take, they claim, and they conquer – even when the object of their desires is a trembling human female.

Publisher’s Note: The books included in this naughty collection are MF and MFM pairings. Though the stories are dark, all have happy endings. **Over 175,000 words of dark romance ~ complete stories with no cliffhangers**

Taking Their Human by Aubrey Cara

Upon waking in a dimly lit white room, my biggest fear was that I had been kidnapped by a serial killer. I learned there are things out here in the universe much worse than anything on Earth. And, even if you escape, you can never go home.

They’re not kind, these being who stole me and want to use me as chattel. The others—part man, part machine— have claimed me for their own, but I’m far from saved.

My planet of Unin had all but been destroyed, and what was left was quickly being devastated by civil wars throughout. Everything I once believed, once knew, once fought ruthlessly to protect, had now vanished. Once I was a fierce warrior, and now simply a slave being transported by two brothers to a planet 720 hours away to mutate and die.

His Human Slave by Renee Rose

Collared and caged, his human slave awaits her training.

Zander, the alien warrior prince intent on recovering his planet, needs a mate. While he would never choose a human of his own accord, his physician’s gene-matching program selected Lamira’s DNA as the best possible match with his own. Now he must teach the beautiful slave to yield to his will, accept his discipline and learn to serve him as her one true master.

Their Captive Mate by Kallista Dane

Left stranded on the hostile world of Cephaia, Commander Cass Randall finds herself face to face with alien twins Ryn and Rom. Seeking revenge on humans for the death of their Mate, the warriors take out their rage and pain on Cass. But they discover the desire they feel for their captive is far more powerful than their anger.

On my eighteenth birthday, the Kleaxians attacked and killed all the human males aboard the Stargazer. The females were kept as mates or slaves. I was taken as a mate. Lucky me.

The huge alien who claimed me is called Prince Kenan. He says he’ll never let me go—that we are bonded for life. When I defy him, he punishes me in the most humiliating ways imaginable. But sometimes he’s tender and loving. I try to be good so he doesn’t hurt me.

I don’t know what scares me more—that I’ll never escape Prince Kenan…or that I’m starting to fall for my captor. 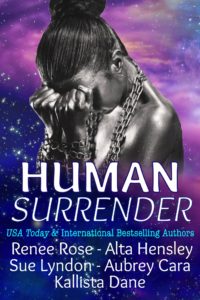 Excerpt  From His Human Slave by Renee Rose

He spun the cage back so she faced him once more. “Open cage,” he commanded, and the voice-activated lock clicked. To her, he said, “Come out.”

His tone went sharp. “Do not anger me a second time, Lamira.”

Well, apparently he’d already cowed her completely because his words went straight to her chest, creating a sudden tightening and sending her instantly into motion. She hated how easily he’d mastered her. One stupid spanking and she rushed to please him.

She sniffed back the tears and attempted to push up to her hands and knees—no easy feat with her wrists and ankles bound.

“Release wrist cuffs. Release ankle cuffs,” he commanded. They sprang apart but not off.

She backed out of the cage, toward the door, not sure how she would get out until his large hands grasped her waist and lifted her easily to the floor.

Where to look… Certainly not at the prince—her master—although his presence was more than commanding. He stood almost seven feet tall with thick, corded muscles across his chest and arms.

Moisture gathered between her legs.

He looked more warrior than prince. No, he was all king. A warrior king. Earlier, she’d stared at him boldly. Now she kept her eyes lowered, trained at his bare feet. They were no different from hers, except larger and with the brown-purple skin tone of the Zandians. She glanced at her own toes. They were cleaner than they’d ever been before. Even her toenails had been buffed to a glossy shine. How long had she been out?

The prince cupped her chin and lifted her face. His touch was gentler than she expected. She still couldn’t meet his gaze, choosing instead to stare at his thick neck and the part of his bare chest visible beneath his loose, finely woven white shirt. Her fingers itched to touch his skin, to find out if it was as smooth as it appeared. What a strange idea. She’d never thought about touching a male in her life. In fact, she’d avoided males as best she could. This one had her completely discombobulated.

Was his chest hairless? Did he have hair anywhere other than his head? Zander, Daneth, and the guards she’d seen outside all wore their hair shorn close to their skulls. Perhaps their horns got too hot otherwise.

When she’d first seen Daneth, she’d thought the horns ugly, but Zander’s suited him, somehow making him even more handsome.

He leaned forward and opened his mouth. She tried to pull out of his grasp, but he held her fast, his gleaming teeth aimed straight for her cheek. For a moment, she thought he planned to bite her face, but his tongue flicked out, and he licked one of her tears. She caught his scent, a clean, masculine aroma with a slightly exotic spice.

Her nipples tightened; her pussy pulsed. No—she definitely was not thinking about licking him back to see how he tasted.

Writer of kinky characters, Aubrey Cara is the quiet girl you have to watch out for. A mostly reformed hellion, she resides off the East Coast of the U.S. with her inspiring hubby, crazy kid, and two hand me down dogs. When she’s not writing sexy smut she’s hiding out reading bodice rippers, repairing leaky faucets, and dodging the PTA.

Renee loves to connect with readers! Please visit her on:

Sign up for Sue’s newsletter & receive a FREE copy of His by Law: