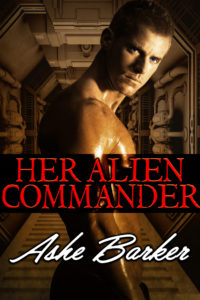 After leaving Earth on what she thought would be an adventure, Caria Montgomery quickly ends up in way over her head. Captured by hostile aliens, she faces the prospect of perishing on an isolated planet until she is rescued by Commander Phahlen Verdar and his crew.

Phahlen is delighted to have a human female aboard his ship. In the years since the women of his own world were nearly wiped out by a terrible plague, taking a mate has become all but impossible for most males of his species, and he doesn’t plan to let this opportunity pass him by. His plan to claim Caria is aided by the fact that, due to the unsavoury nature of the crew of the ship on which she was travelling, she is now a wanted fugitive back on Earth.

Though Caria is initially defiant, a sound spanking on her bare bottom demonstrates her admittedly handsome future mate’s resolve. His bold dominance awakens an intense need within her, and before long she finds herself yearning for the pleasure of his masterful lovemaking. But is she truly prepared to surrender herself fully to her alien commander, or will she seek to return to Earth and clear her name as soon as possible?

Publisher’s Note: Her Alien Commander includes spankings and sexual scenes. If such material offends you, please don’t buy this book.

“From your tone I take it you’re not yet ready to accept the reality of your situation.”

He’d heard enough. Phahlen believed in action rather than words in any event and this discussion was at an end. He lifted Caria bodily from her perch on the sofa and slung her over his shoulder. He ambled across the room to the food station, but this time his instructions into the audio system had nothing whatsoever to do with nutrition.

“Rope, please. Carbon compound, one metre in length.” The required item materialised in the next moment and he took it from the delivery hatch. He ignored her furious squirming, screeching, and beating on his back with her fists as he returned to the sofa. He sat down and calmly upended her across his lap.

Caria fought like a tiger. She struggled, screamed, flailed her arms, and kicked her legs at him, but none of it made the slightest impression. He was four times her size, and she was getting a spanking. He caught her legs under one of his to hold her still, and grabbed first one wrist, then the other. He secured both behind her back and held them there with one hand while he wrapped the rope around them. When he had her bound tight he produced a small laser scalpel from his pocket.

“I always spank on the bare, Caria. Without fail. On future occasions you will remove your clothing for me in order to facilitate that, but this time…” He regarded the all-in-one suit with regret. She really had looked very fetching in it, but the garment was to be a casualty of this moment. He would replace it for her. Eventually.

He plucked the fabric at the waist away from her body and sliced it cleanly with his blade. Caria let out a shriek that he was certain would have brought half the galaxy running if they had heard it. Phahlen blessed the soundproofing qualities of the Empyrean’s construction as he cut the lower half of her suit from the upper portion, separating the two parts. He opted to just rip the fabric from her upturned bottom rather than risk setting her on her feet again to slice the front of the garment and risking her getting injured if she were to fight him. In any case, he had achieved his objective. Caria’s beautiful heart-shaped bottom was bared for her punishment. He tugged the material lower to reveal a good length of her thighs too. He intended to give her sit spots some serious attention.

“Let me go! Get off me, you bastard.” Caria’s screams were subsiding, and he supposed that was because she now appreciated his superior strength and knew she would not best him by force. Still, her determination to defy his wishes was seemingly undiminished. And her propensity for name-calling was starting to grate.

“The sooner you surrender to this, to the inevitable, the better. You’ll be getting a spanking, a good, hard one. It will continue until you stop this struggling, and you’re ready to apologise—and mean it.”

The first slap landed full in the middle of her delightful cheeks. Phahlen’s hand print bloomed immediately, the vivid red outline stark against the creamy skin of her bottom.

Phahlen ignored her continuing flow of screams and invective, landing spank after spank across his defiant little human’s curvy behind. For such a tiny little thing she could certainly belt out some decibels. He wondered whether he should have gagged her after all, though that might have defeated his objective since it was contrition and an apology he required from her. Maybe next time…

She was determined; he had to allow her that. Phahlen admired the little female’s fortitude as he rained the slaps over her skin, and watched the area turn pink under his ministrations. Pink darkened to crimson, and still she continued to curse and wriggle.

Her struggles were futile, of course. Phahlen had her secure and she was going nowhere until he’d finished and had his way. He was in no hurry, and knew which of them would tire of this first.

Her squeals and sobs did start to subside at last, and he paused to rest his hand on her scorching buttock. “Are you ready to talk to me now?”

He hoped that wasn’t true, but he understood why she would think it right now.

“Noted. And your apology?”

“Also noted.” He resumed the spanking, this time shifting his attention to her thighs. Caria’s shrieks found an additional octave or two as he applied his relentless palm to her tender sit spots. He had a feeling this would not take much longer now.

Read Chapter One for free