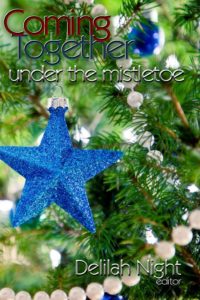 & poetry edited by Delilah Night. This is a charity anthology, all proceeds to benefit Project Linus. The collection includes my short story, Should Auld Acquaintance Be Forgot?

Here’s what to expect from the anthology – 24 sizzling stories and poems, and all for just $3.99

Blurb : Should Auld Acquaintance Be Forgot? By Ashe Barker

She’s recovered, moved on. Her marriage is over. Or is it?

Cain has other ideas. Heather might have left him, fled to the wilds of bloody Scotland of all places to get away from him, but she never even signed the divorce papers he sent her. He’s wasted enough time and now he’s determined to settle things, one way or another. A decent spanking always used to work, but is it too late?

New year, new start. There’s only one way to find out…

Excerpts from Should Auld Acquaintance Be Forgot?

“Heather, open up. I’m freezing my nuts off out here.” The familiar voice rang in her head. Heather covered her ears.

She shrank into a crouch.

Moments later footsteps in the next room warned her that he had simply followed her treacherous dog around to the rear of the property and come in through the open back door. He was here, inside her mill.

The studio door remained ajar from when Mutt had charged from the room. Heather felt the man’s presence before she saw him, since she refused to lift her head and face him. He crouched before her and took her elbows in his hands.

“So, Heather. Keeping busy, I see.” His tone was soft, amused almost.

“What are you doing here?” Heather raised her gaze at last to meet his, and immediately wished she had not. He was, if anything, even more devastatingly handsome than she remembered, and her recollection of him was pretty accurate, or so she’d thought. “What do you want?”

“Because you’re my wife.”