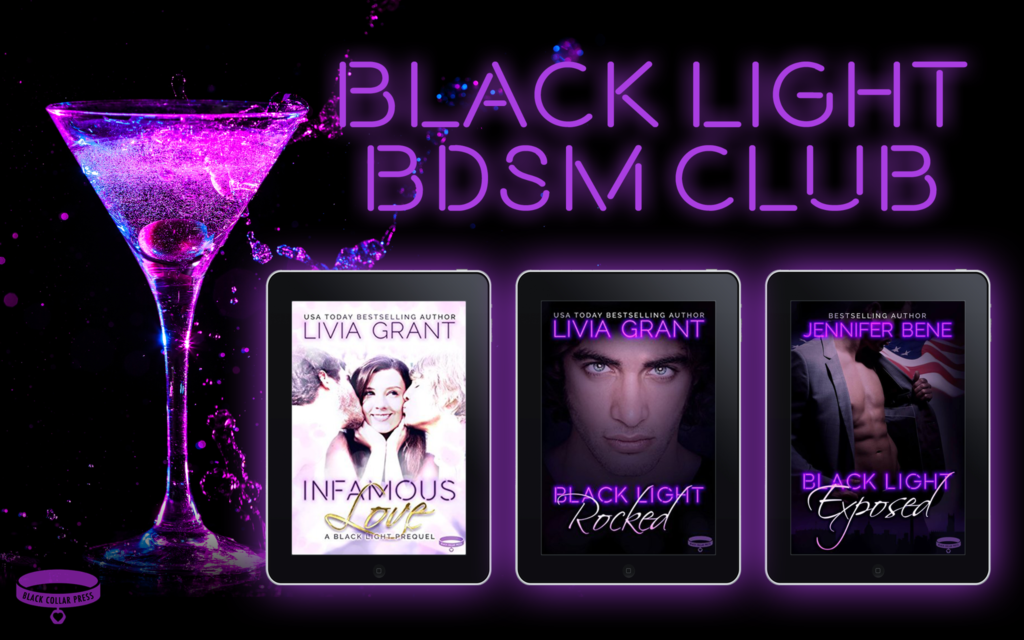 Maddie O’Neill has always wanted to be a reporter, but after two years in Washington, D.C. working at a daily coupon paper, she can feel her dreams slipping through her fingers. Suddenly, with a single phone call from a friend at The Washington Post, everything changes. They have an open position, and he wants her to have it.

There’s just one problem – he wants a story first, and she has one chance to impress him.

Now Maddie is trapped in a web of lies, getting tied up in ropes by one of the hottest congressmen in the House, and as she sinks deeper into this world of pain and pleasure she knows she will have to make a tough choice before time runs out. But will she follow her dreams or her heart?

Get ready for spankings, bondage, drama, and heartache, as you follow Maddie and Thomas through all of your deepest fantasies in ‘Black Light: Exposed’, a stand-alone book in the Black Light Series!

“I’ve got some questions for you, Maddie.” He stood, withdrawing his touch as he walked around the chair to where she couldn’t see him.

“Questions?” she asked. Wasn’t she supposed to be asking the questions?

“Yes.” Thomas’ voice was a low rumble behind her, and then the sharp sting of a spank landed on her ass. It shocked her more than it hurt, but she still gasped loudly and pulled against the rope. “Keep your heels on the floor, beautiful, and listen to me.”

“Okay.” She nodded and then another swat landed, a little harder. “I mean, yes, sir!”

“That’s a good girl.” He had a smile in his voice. “Let’s get you warmed up.” He began to spank her, sharp stings followed by warm heat that bloomed over her skin. Never truly painful, but always a shock

that made her push up onto her toes before she forced her heels to press back into the carpet.

The three-inch lift from her shoes seemed to have her ass at the perfect height for him to pepper every inch of her skin, and he did. Starting out slow, with a breath or two between each smack, but then they grew faster. More intense, until the stings started to overlay one another and she knew she was squirming, tugging against the rope that slid like silk across her wrists without giving an inch. Murmuring incoherent pleas that she bit down on, because she knew he was being gentle, that the teasing burn he was building was nothing more than that – a tease.

Because she’d had spanks like this before, and she wanted to know what came next.

“There.” He stopped, running his hand over the warm skin of her ass, and she could feel the low heat in it as he squeezed. “So beautiful… all pink and ready to play. Are you ready, Maddie?”

The bravery came from some dark, hungry place inside her, but she nodded and pushed her voice to give more than a whisper. “Yes, sir.”

“Alright, now tell me the truth. Were you invited here tonight?”

“Yes, sir.” A hard spank landed on her right cheek, and she cried out as the shock made her gasp. “What the –”

“Want to try that again? Remember, honesty is important.” His hand brushed over the place he’d just struck, and she shivered. “Were you invited here tonight, Maddie?”

“Yes, sir.” She lied again, and this time the swat to her other cheek was even sharper. It was a burst of fiery sting that made her bounce her hips trying to settle it, and if her hands hadn’t been bound she would have reached back to soothe the skin.

Thomas leaned over her back, the brush of his shirt across her ribs making her shiver. “See, I don’t think that’s true, beautiful. It’s in the rules that any member bringing a guest has to be present. So, either your friend broke the rules and didn’t meet you, or you heard about this place from someone who should not have been talking about it and you tried to come in on your own.” He pressed an all-too-gentle kiss to her ribs, and she drew in a shuddering breath as her nerves ramped up. “And I sincerely doubt that anyone would invite you and then not be here to play with someone so impeccably beautiful. So… which is it?”

“Maddie?” His voice had that edge in it again, that chastising tone that made her want to apologize for things she couldn’t possibly admit.

“You’re right, I, um, I heard about it, but I can’t tell you their name. It’s my fault, not theirs… sir.” Another lie, but this was one she hoped he’d believe.

“So, you planned to just come in here and… what? Offer yourself to the first Dom that wanted to play?” He delivered a hard spank to the place where her ass met her thighs and it hurt even more,

forcing her up onto her toes before she dropped her heels again.

She nodded, agreeing to the lie. “Yes! Yes, sir. I just wanted to see it.”

Thomas laughed low, standing up behind her. Another hard swat, but she gritted her teeth to stifle the whine. “You’ve been a very naughty girl, Maddie… and while I’m very glad I was the one to find you, I don’t like it when subs lie to me, and I like it even less when they put themselves at risk. Anyone could have offered to let you in.”

“I’m sorry, sir.” Not a lie. Guilt surged inside her, and she felt bad for continuing to lie, but there was no way out now. She was in, she’d already seen one senator embroiled in this devious little underground sex club, and where there was one – there had to be more. A whole new, exciting layer to the Jaxson Davidson scandal.

It had front page written all over it.

Suddenly, Thomas slipped his hand between her thighs, cupping the evidence of her arousal as he applied the barest hint of pressure to her clit. The shock of it pulled the brake on her thoughts, shifting gears to the thrumming heat inside her, the pulse of desire that beckoned her ever closer to the darkness all around her. Maddie pushed her hips forward, seeking a little more, and she knew that the story wasn’t the only reason she was bent over this chair. No, she’d let him tie her down because some piece of her wanted this, wanted more than what she knew, and he seemed more than willing to give it to her. “Please, sir…”

“Please what?” he asked, his hand staying still against the damp fabric of her underwear as she rocked more urgently against his touch.

“Please touch me!” It was begging, something she would have never have imagined herself capable of, but her mind was spinning out of her control, and her nerves were a network of need that she knew instinctively Thomas Hathaway could satisfy.

“Oh, no. Not yet.” He pulled his hand away and she actually whined, twisting against the rope and shifting her weight from heel to heel in a miniature fit. The dark tone in his voice instantly quieted her, “You know the deal, Maddie. Naughty girls don’t get rewards, they get punished. Then, if they’re very, very good, they get a reward.”

Jennifer Bene is a best-selling author of erotic fiction who loves wine, hiking, whiskey, and keyboards – not necessarily in that order. She’s been writing for years, but it’s always been the dark stuff that makes her tingly, so her books are full of aggressive alpha males and Doms, feisty women who may or may not have a submissive streak, and intense, psychological storylines. Whether it’s showing up in erotica, paranormal romance, ménage, or anything else she decides to venture into, it’s always a little dark. But, don’t worry, she also insists on having a nice little happily-ever-after! After all, without the dark, we’d never notice the light, now would we?