Have I been Naughty or Nice?

Hmm…that’s a tough one. By nature, I’m a pleaser, so I’d say nice, but I write naughty romance for a living, so does that make me pretty naughty?  Who cares, as long as this guy is playing Santa?? 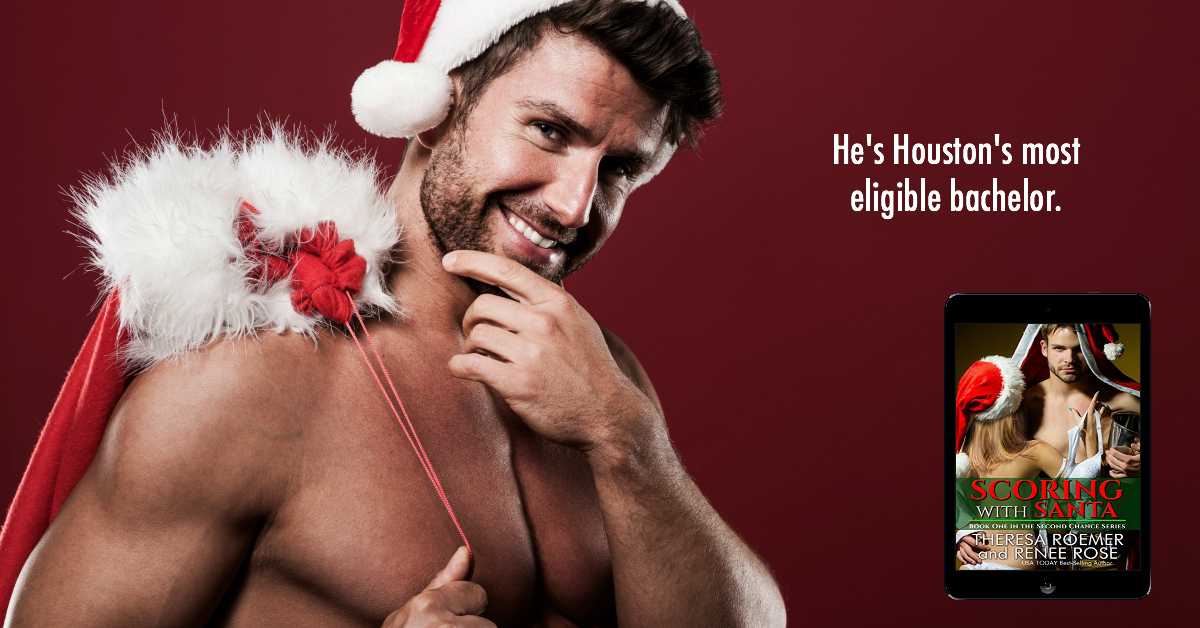 In Scoring with Santa, the hunky football coach agrees to play Santa for a foster kid Christmas event. Brandy Love, the owner of the fitness studio where he works out and the sponsor of the event, finds him pretty irresistible!

Here’s what people are saying about Scoring with Santa:

“Go get this book. Seriously.  This may be the best holiday romance I’ve had the pleasure to read all season long.”  ~ Harlequin Junkies

“Who says you can’t have it all? With a perfect combo of humor and heat, Renee Rose and Theresa Roemer prove a woman can be a successful business owner, mom, and find love with a hunky, powerful man.” ~Aubrey Cara, Author of Taking Their Human and Candi’s Debt
“A funny and sexy sports romance not to be missed. A great book to read during the holiday madness when you just want to relax and enjoy. 5 Star Read!” ~Alta Hensley, USA Today Bestselling Author

Interesting Fact:  The heroine and some of the material for this book was based on co-author Theresa Roemer’s life.  Theresa owned a chain of fitness clubs called Body by Design and personal training services called Phenomenal Physiques, took the U.S. Open title in bodybuilding at the age of 40, and held the titles of Mrs. Houston U.A., Mrs. Texas U.A., and was the 1st runner up for Mrs. United America concurrently.

Houston’s most eligible heartthrob. A career-driven mom.  The irresistible attraction could destroy both their careers.

Rick Morehouse doesn’t date single moms. As the former quarterback for the Houston Texans, he’s Houston’s most eligible bachelor. But after the heartache of abandonment by his own mother’s string of boyfriends, he never wants to hurt anyone’s kids that way. When he meets Brandy Love, the drop-dead gorgeous owner of Phenomenal Physiques, he’s totally taken by the confident career woman. It’s too bad she has kids.

Brandy Love doesn’t have room in her life for a relationship. Opening a chain of gyms and parenting her kids already takes more time than she has. But when Coach Charming drops in on her gym, she’s sorely tempted.

When a vengeful columnist roasts Rick to bring down his team at the playoffs, Brandy must decide if he’s worth fighting for. But even if she can save him, will he accept her and her kids in his life? Devour this sexy and sweet holiday page-turner today!

Rick stepped closer, rather than drawing away. They probably taught him that in Flirting 101. “I’ll tell you what,” he said, flashing that heart-stopping smile at her. His voice was deep and resonant and seemed to go right into her body, activating every cell. “I’ll fill mine out right now, and I’ll have Donnie’s mom sign his tonight so that next time we are set up properly.”

She put her hands on her hips. “Somehow I don’t think you’re taking this—me,” she spluttered. “As seriously as you should.”

Obviously she was right because his smile only increased. He cocked a brow. “How serious do you want to take this?”

Her tummy fluttered at the innuendo. Her brain stomped its foot. “Rick Morehouse, that flirty act might work with Houston Socialites, but it’s not going to work with me.”

His lips twitched. “I wasn’t flirting. I’m just being friendly.”

Theresa Roemer is an author, media personality, entrepreneur and small business owner based in Houston, Texas. Theresa’s passion for health started at a young age. As a child Theresa was diagnosed with rheumatic fever many times over, which caused her to have a heart murmur; she was sickly and her doctors diagnosed her with a lifetime of physical constraints. Determined to prove the doctors wrong, Theresa began her lifelong journey to stay active, healthy, and physically fit. Theresa took the U.S. Open title in bodybuilding at the age of 40, and held the titles of Mrs. Houston U.A., Mrs. Texas U.A., and was the 1st runner up for Mrs. United America concurrently.

Theresa’s passion for health inspired her to write Naked in 30 Days to empower women to feel as vibrant and healthy at 45 and beyond as they did at 25.  This is her first work of fiction.

Check out all the Mistletoe Hoppers!