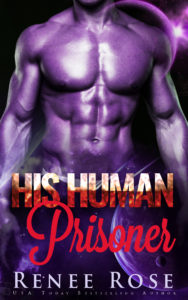 I rushed to get out book 2 of Zandian Masters (thank you to Rayanna Jamison for helping me name the series!). It’s up on Amazon and available for free through Kindle Unlimited. Lily and Rok’s story ended up being shorter than Lamira and Zander’s, but there’s one more book to come, featuring Lamira and Lily’s mother, Leora, and Master Seke, the Zandian warrior.
These books are stand-alone romances, each with their own HEA, but there is a plot thread of the recovery of Zandia that makes it easier to read the books in order.
If you have a Nook or don’t use Amazon, I apologize. For some books, I’m finding it more lucrative to go straight to Kindle Unlimited rather than starting wide. If you’d prefer the book in another format for a different device, email me your Amazon receipt and I’ll send you a link to get it in whichever format works for you. (This goes for His Human Slave as well).
HIS HUMAN PRISONER
He didn’t believe in destiny. Until he met her.
When a beautiful human slave steals Rok’s ship and leaves him stranded on an abandoned planet, he’s furious. Discovering her sister is the mate to the prince of his species only makes him more determined to find her and punish her thoroughly for her crimes. Yet when he captures her, he finds her impossible to resist. Punishment becomes exquisite pleasure as he teaches her to submit.Lily’s attraction to the huge Zandian warrior unnerves her. She’s never been moved by a male, nor interested in sex before, but Rok coaxes every bit of emotion out of her as he demands her complete surrender. But he intends to turn her over to the authorities, which will mean her certain death. She must find a way to escape the handsome alien before she loses her life–or worse–her heart.

His Human Prisoner is a stand-alone sequel in the Zandian Masters series with an HEA.